Even if you haven’t read any books or articles on the topic, most of us have at least a vague idea of the serious effects stress can have on a body. We know, for instance, that when we’re under prolonged stress, we’re more likely to come down with a cold or some other illness. Stress can also bring on or worsen headaches, raise blood sugar levels, cause carb and fat cravings, increase blood pressure, promote acne, trigger asthma attacks, and impair memory, to name just a few.

A study by Stevens et al. (2013) suggests that it’s definitely possible. What the team did was they exposed pregnant mice to something called “restraint stress” (see image below) for three times daily. They started doing this on gestational day 13 (E13) and for some mice continued the regime up until the day of birth. 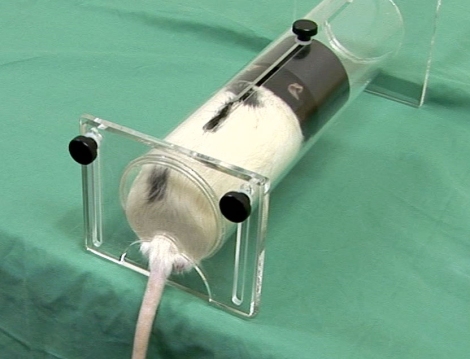 Image of a rat undergoing restraint, a situation which is very stressful on prey animals such as mice and rats.

Because inhibitory (GABAergic) interneurons must travel a long distance in the brain during development in order to reach their final destinations, Stevens et al. hypothesized that they might be particularly vulnerable to the effects of prenatal stress. So the team developed a mutant mouse in which the interneurons expressed a green fluorescent protein (GFP), allowing the researchers to easily identify the interneurons as they traveled along their courses.

An illustration of the developing brain, showing inhibitory interneurons (green) migrating from the ganglionic eminence (GE) into the developing neocortex.

What the researchers found was that, even after only a single day of maternal restraint stress, migration of the interneurons was delayed compared to embryos that were unexposed to stress. As you can see in the image below published in the study, 1-day prenatally-exposed embryos displayed far fewer interneurons migrating into the developing cortex (indicated by the white arrows).

As the researchers continued the experiments, exposing mothers to restraint daily, the more stress the mothers and embryos underwent, the more extreme the deviations in brain development. In particular, the team found that those interneurons that had to travel the furthest, i.e., towards the middle of the brain nearest the hemispheric divide, the more vulnerable they were to missing their targets altogether, such as ending up lost within the underlying white matter regions. Therefore, the researchers proposed that the development of medial or mid-sections of the cortex may be particularly vulnerable to teratogenic stress.

Interestingly, they also found that, even though migrations were initially more delayed for interneurons traveling towards the back of the brain (caudal), by the neonatal period the caudal regions had recovered somewhat and it was instead the frontal lobes that exhibited more lasting disturbances. And thus the medial frontal lobes, in particular, appeared to be most vulnerable to the effects of stress.

So it seems that extreme and/or chronic stress during pregnancy can probably have some pretty major effects on the brain of the developing baby. Perhaps lessons in meditation should be part and parcel of early prenatal classes for expectant parents? Not a bad idea.

5 responses to “How Stress Changes the Developing Brain”