A few years ago, researchers reported that the Fragile X Mental Retardation (FMRP) pathway helps to regulate expression or activity of 93 genes linked with idiopathic autism [1, 2]. FMRP, within a complex of CYFIP1 and EIF4E, negatively regulates a wide range of protein translation. Interestingly, the Eukaryotic Initiation Factors (EIF) are a family of proteins that control the translation of proteins at all stages of development. 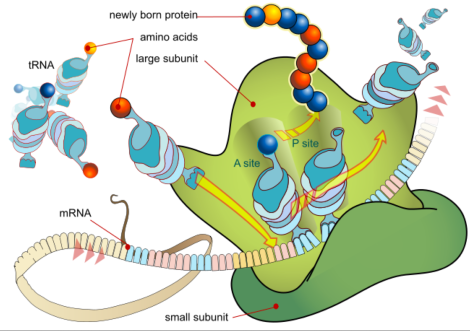 It’s known that in people with FXS, expression of FMRP is decreased, most generally due to hypermethylation of expanded trinucleotide repeats in the promoter region of the gene. In animal models attempting to replicate this type of gene expression, it’s been shown that FMRP suppression leads to premature neurogenesis and neural differentiation. As mentioned, the EIFs are a family of proteins key in the regulation of translation and, as such, are vital regulators during cellular differentiation [3, 4]. Given that FMRP knockout in animal models results in premature neurogenesis, it suggests that the FMRP-CYFIP1-EIF4E is no exception in the control of cellular differentiation, in this case, neuronal differentiation.

What it also suggests is that, since FMRP shares regulatory links with so many autism-related genes, that translational regulation may be vital in the etiology of autism in general. What’s so important about regulating translation, you ask? Well, the ability of a neural progenitor to differentiate is two-fold: not only does it necessitate the presence of extrinsic signaling molecules which inform the cell that it’s time to mature and terminally differentiate into a neuron, it also requires some intrinsic, cell-autonomous factors, such as protein receptors that allow those extrinsic molecules to dock on the cell, and also proteins which underlie the transduction of those signals within the cell. So one means which a progenitor uses to suppress neurogenesis and differentiation is through the regulation of gene transcription and protein regulation, in particular through regulation of those proteins which are used to receive and transduce maturation signals.

We’re currently working on a manuscript related to this topic, so stay tuned. After publication (cross fingers!) I’ll be able to go into more detail.