“… science is a complex and heterogeneous historical process which contains vague and incoherent anticipations of future ideologies side by side with highly sophisticated theoretical systems and ancient and petrified forms of thought” (Feyerabend, Against Method, p. 105).

What was so revolutionary about the Copernican Revolution? Many people might assume that it was the rejection of the Ptolemaic theory that the sun and the planets revolved around the earth and the acceptance of a heliocentric paradigm. But what turned out to be far more revolutionary was a change in the ways humans study the natural world.

The great Grecian philosopher-scientist, Aristotle, proposed that the heavens were composed of 55 concentric circles, known as deferents, upon which all celestial bodies moved. At the center of Aristotle’s universe lay the earth. Along these deferents, each body moved on a smaller epicycle. Several hundred years later, Claudius Ptolemy adapted Aristotle’s system, including in some cases epicycles-upon-epicycles, which helped to account for some of the retrograde (backwards) movements of the planets and their varying brightnesses.

With the exception of Aristotle and his students, today we associate Grecian philosophy with the school of Rationalism, which holds that reason is the primary source and means of testing knowledge. In contrast, Aristotle believed that the senses were our greatest source of knowledge and he and his students avidly studied the natural world. In this way, Aristotle is often considered one of the earliest Empiricists.

Obviously today we realize that Nicolaus Copernicus and his proponents, such as Galileo Galilei, were correct and the earth and all the planets of our solar system revolve around the sun. However, ironically, the Ptolemists during the Italian Renaissance were more closely aligned with Empiricism because, with the methodologies and theories available at the time, the Ptolemaic system was more successful in explaining a broader array of observations. For instance, if Venus were actually rotating around the sun rather than the earth in an orbit whose distance from us should vary by a factor of about 40, why then does it appear to change in size very little throughout its cycle? This and other observations caused many within the scientific community (and the Church) to be wary of Copernicus’ theory because other fields of science (e.g., optics) were only in their infancies.

Nevertheless, Copernicus’ theory gathered proponents over time and eventually the tides turned and scientists learned that Empirical observation was not always the most reliable of investigative tools but required reason (Rationalism) to temper its tendency to mislead. And thus the Italian Renaissance ushered in a new scientific era of investigation that combined both schools of thought.

Stricter adherence to the scientific method in modern times, a more stringent peer review process, tighter competition for funding, and an over-reliance on technologies (including computers) to read and interpret data, has led to a moderate rejection of the Copernican movement by placing less and less emphasis on Rationalism and more emphasis on Empiricism once again. Today’s science seems to fears the philosophical, rational basis upon which its history is founded. Why? Perhaps because if we were to admit that science still has much in common with its cousin, Philosophy, we would be discrediting our accomplishments in the eyes of the larger scientific and lay communities.

Much of this current tendency may be a reflection of the heated debates between Evolution scientists and Christian opponents that have gone on since the 18th century, during which time many scientists have taken refuge under an umbrella of pseudo-factualism, attempting to raise theory beyond the reach of debate by calling it “fact”. Since the 1970s, Creationists have in turned followed suit, attempting to do the same with their own Biblically-derived concepts while conveniently forgetting that one of the overarching tenants of Science handed down to us from Aristotle is that the laws of nature are autonomous and not explicable via miraculous intervention.

Note: I’m a staunch Evolutionist and see daily support for the relatedness of living things in all aspects of my work so much so that I consider any grossly different alternative theory ridiculously unlikely. However, here we’re talking about Epistemology, not the credibility of theories, which is an altogether different topic. 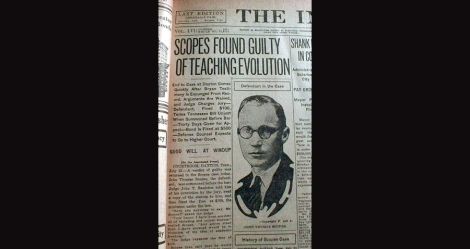 Newspaper report of the conviction of the school teacher, John Scopes, who taught Evolution to his students.

Sadly, the modern demand from layperson and scientist alike requiring scientific investigation (particularly in the realms of biology and medicine) to be a form of truth-seeking, with the unfortunate assumption that all theories not currently in dispute are labeled “scientific fact”, leads society into a catch 22: any ideas not labeled as factual are rarely given fair hearing, but any weaknesses of ideas that are labeled as such are improved only with much pain and reluctance.

Scientists still use Rationalism, we just can’t admit it because we are now under such scrutiny in the public eye that we’ve all come to believe the equation, “science = fact”. But it doesn’t. Here is how the equation actually reads: “scientific investigation = best methodology for studying, understanding, and predicting the natural world”. It is not fool-proof. It is prone to all the foibles of which the human mind is capable. But that reality should not be surprising nor compromise the field’s integrity. As humans, we already know that it is impossible– and not even preferable– to separate our humanity from the subjects we study.

After all, it is human reason that often interprets the data we collect in order to build it into a larger coherent model. And while this stage of the scientific process is prone to many errors, it’s also the stage in which creativity– that aspect of human invention that ties all our creative disciplines together– brings our work to the next level. It’s the part of science that no computer will ever be able to replace.