And the Camel said ‘Humph!’ again; but no sooner had he said it than he saw his back, that he was so proud of, puffing up and puffing up into a great big lolloping humph.

‘Do you see that?’ said the Djinn. ‘That’s your very own humph that you’ve brought upon your very own self by not working. To-day is Thursday, and you’ve done no work since Monday, when the work began. Now you are going to work.’

‘That’s made a-purpose,’ said the Djinn, ‘all because you missed those three days. You will be able to work now for three days without eating, because you can live on your humph; and don’t you ever say I never did anything for you. Come out of the Desert and go to the Three, and behave. Humph yourself!’

~Rudyard Kipling, How the Camel Got His Hump.

Although we all realize that the camel didn’t get its hump out of laziness and that this is just a cute children’s story designed to impress upon kids the value of honest work, some days I’m not so sure that current theories about adaptation aren’t far off the same mark.

The great Stephen Jay Gould referred to these hypotheses concerning adaptation of features as “Just So Stories,” named after the popular children’s book by Rudyard Kipling that, through a series of charming tales, told how different animals acquired their unique features, such as the camel and his hump.

While modern hypotheses may seem a little less far-fetched, they are no less fanciful– in part because modern scientists are sometimes so focused on “What adaptive advantage could this trait possibly give?” rather than determining how said trait could have arisen and been passed down by other means. In addition, so often these hypotheses are untestable, so in actuality they’re not even “hypotheses”. They’re just interesting thoughts.

My biggest complaint about these “interesting thoughts” is why we insist that a single physical trait be acted upon directly as if it exists in a morphological vacuum. For instance, just the other day I wondered to myself, “Why do humans have such long hair?” We have the longest hair of any mammals– especially of those naturally occurring. While I wanted a causal reason for the increase in relative hair-growth (e.g., mutations in Genes X , Y, Z lead to a prolongation of the phase of anagen in humans), instead I found posts by evolutionary biologists positing that it was an adaptive development to deal with the cold. (By their measure, long versus shorter hair would’ve meant the difference between life and death!)

But here’s another thought. So often the genes that control structural development– the aspect that is most easily observed in the fossil record– are involved in many organ systems, not individual organs. (Individuals with congenital malformations often have complex combinations of multiorgan malformation, including skin and hair malformations.) And so, if we absolutely must call upon adaptation to explain a feature’s subsistence, why did positive selection have to act on that particular feature alone? Why couldn’t it have acted on a related feature and the one of interest just happened to have gotten taken along for the ride, especially if it was neutral or only mildly deleterious in nature? For instance, wouldn’t it be more likely that long hair was simply an evolutionary oh-well that occurred alongside another more adaptive feature, e.g., changes to the brain or bipedalism? I would certainly think so.

But in that way, we’ll never know, because we weren’t there to see how it all happened. And that’s a major scientific danger in using an adaptationist paradigm to try to explain why change occurred. Trying to tease out such specifics from so little information is just blowing hot wind. It’s much easier to figure out how change occurred and work from there.

In contrast to the adaptationist paradigm, Gould also reiterates in his book, The Structure of Evolutionary Theory, that major changes across species over time may be more strongly affected by something known as allopatric speciation, which is essentially the isolation of a subpopulation from the original population, leading to a divergence in evolutionary development of the two. Most typically this occurs due to geographic isolation, in which a population is physically split in two. But it’s also little different from what humans do in agricultural breeding, something which Darwin based a great deal of his Origins on. In agriculture, stock is not allowed to freely breed with one another but mates are unnaturally selected, in this case for accentuating features humans find useful in farming, such as increased milk production or muscle mass. This ultimately creates isolated subpopulations who, over time, can appear quite strikingly different from one another. 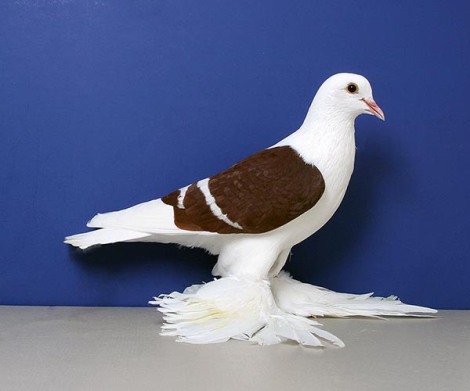 A pigeon bred for the tufts at its feet.

Anyways, I digress somewhat. The major point is that scientists have been lulled into a certain way of thinking about feature adaptation ever since Victorian times– as if individual features could be separated from the remainder of the organism in question. But gene knockout and knock-in studies surely have taught us that rarely, if ever, is a single gene’s expression relegated to a single organ. While the timing of its expression may vary, as well as the specific transcripts transcribed, most genes are expressed throughout various tissues and organs of the body. And this is especially the case for genes that are involved in controlling the structure of those tissues and organs.