Whales have a pretty phenomenal evolutionary story. Not only do they share our terrestrial mammalian history, arising from a hooved deer-like creature, but they subsequently managed to become fully aquatic within the span of about 5 million years, evolving into creatures that more closely resemble our modern day cetaceans. 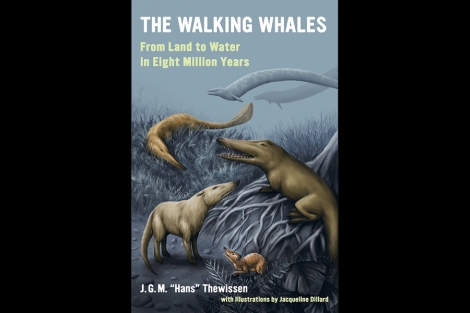 I’ve recently finished the book, The Walking Whales by Hans Thewissen– a researcher who is a giant in the field of whale evolution (pun intended). In it, he details much of his work and the stories behind finding those all-important fossils that, for instance, bridged the gap between terrestrial and aquatic whale ancestors. Before Thewissen, there was no crocodilian-esque intermediate that showed the gradual transition of whales from land to water. What’s more, before then the paucity in transitional whale fossils were a core argument in Creationism, which held that whales had always been aquatic.

I won’t detail the stories of the book (I hope you’ll read those for yourself!), but I will describe some of the major transitions in whale evolutionary history and ultimately explain why geneticists should be studying cetacean genomes far more than we currently do. 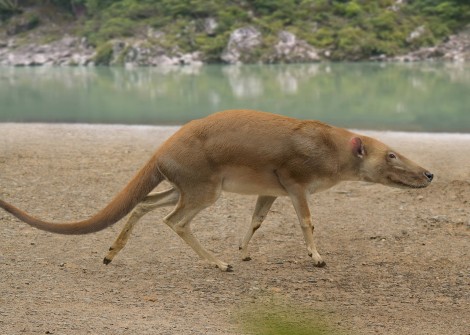 It was originally believed that whales’ closest relatives were the extinct order, Mesonychids, which were carnivorous ungulates. The reasoning behind this was fossil evidence: both fossil mesonychids and fossil whales had similarly shaped triangular molars. If you’re at all familiar with paleontology, you’ll know that teeth are often a prime means for identification and placing an organism in its respective clade, not only because teeth are the hardiest bones of the body but also because tooth shape is often unique to a clade and even to a species.

In shocking contrast, molecular evidence indicated that whales’ closest relatives were in fact the artiodactyls (even-toed ungulates like pigs and goats) and that their closest living relative is the hippopotamus. Many scientists, especially traditional paleontologists, refuted this claim. 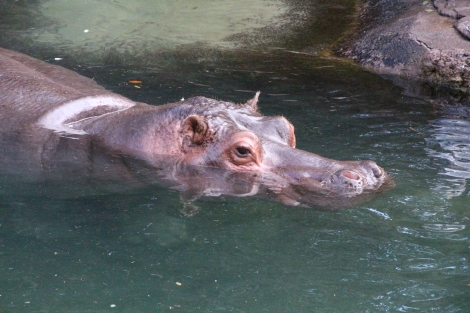 Until… a fossilized ear bone of the Indohyus, an extinct form of artiodactyl ancestor, was found. As a matter a fact it was Thewissen, the author of The Walking Whale, who found it. Whilst his technician was artfully cleaning the skull of an Indohyus, the skull was accidentally (but fortuitously) split apart revealing the structure of the inner ear. Thewissen recognized it immediately: the tympanicum that surrounds the eardrum shared the same characteristicly thick nature as all ancient and modern whales found to date. He had his answer: whales are descended from artiodactyls, not mesonychids. The geneticists were right! 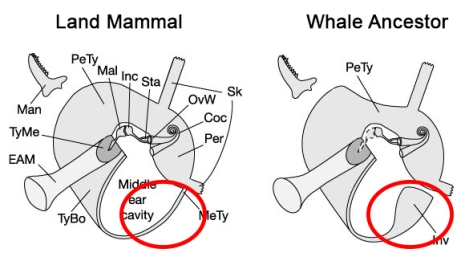 Tympanicum circled in red, comparing a generalized land mammal to a whale ancestor. All whales and their ancestors, from the land-dwelling Indohyus to modern day humpbacks, have a variant of this thickened and detached ectotympanic bone.

Disclaimer: It should be noted that although the majority of researchers who study whale evolution seem to accept Indohyus and artiodactyls as basal to the cetacean line, there are still a minority of scientists that hold to the mesonychid theory. Unfortunately, since there is a dearth of usable fossil DNA, it’s possible we will never know with considerable certainty to which clade the whales truly belong– especially since mesonychids left no living descendants.

Pakicetus was discovered in the 1980s in Pakistan and is the earliest recognized whale ancestor that is considered a cetacean (Indohyus is not). Pakistan during the Eocene epoch was largely submerged under the Tethys Sea (which is now the Indian Ocean) and was a coastal region off what was then the island of India. Through the continuation of continental drift, India has continued to push into Asia, creating land out of once-coastal regions (e.g., Pakistan) and the Himalayan mountain range. 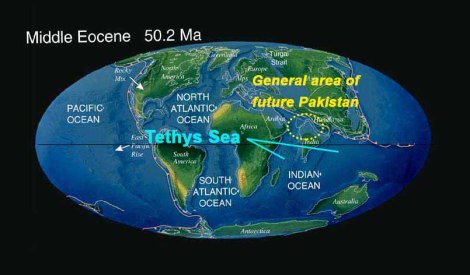 Unlike its predecessor, Indohyus, Pakicetus likely spent much more time in the water. This conclusion is based on two facts: 1) the orbits of its eyes are located towards the top of the head, similar to hippos and crocodiles, who are able to keep watch while submerged in water; and 2) it has demonstrably heavier bones that Indohyus, a feature that is common to semi-aquatic and aquatic animals that helps them to remain submerged and not float towards the surface. 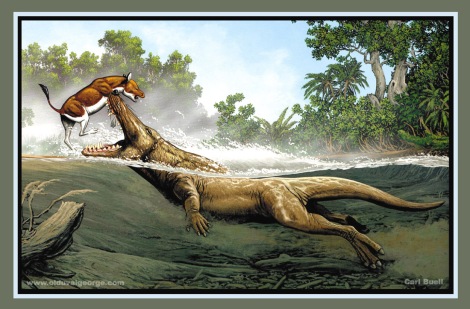 The next step in whale evolution was the Ambulocetids. Although they were mammals, their structure and most likely their lifestyle were similar to that of a crocodilian. It’s theorized that, like crocodiles, they hunted unsuspecting prey from a submerged domain, watching as an animal drew near to drink and then launch for an attack. Like Pakicetus, it’s believed that Ambulocetus lived primarily in fresh water, although may have resided near the confluence of river and ocean.

The Remingtonocetids were the next generation in whale evolution. Unfortunately, we still don’t know what their limbs or feet looked like (sadly, no fossils have been found). Although their fossils are found in what were once shallows, it’s believed that they lived a considerably more aquatic life than their Ambulocetid predecessors.

Ironically, even though Basilosaurus is the youngest ancestral whale, it was the first ancestor to be identified. In 1847, the naturalist, Richard Harlan, thinking he had in fact found a fossil skeleton of a plesiosaur-like dinosaur, named the creature “Basilosaurus,” which roughly translates to “king lizard.”

Victorian depiction of a Plesiosaur, a giant marine reptile.

A number of scientists at the time disagreed with Harlan’s classification, so he took his specimen to present it to the Geological Society of London. Prior to that meeting, he met with the famed (and sometimes infamous) comparative anatomist, Richard Owen, who convinced Harlan that the tooth anatomy of his specimen was indeed cetacean and not reptilian. Owen subsequently renamed the animal, Zeuglodon, which means “yoke toothed,” referring to the specific shape of the Basilosaurid teeth. Since, however, the International Code for Zoological Nomenclature requires that species be named on a first-come-first-serve basis, we continue to use Harlan’s misnomer, Basilosaurus. 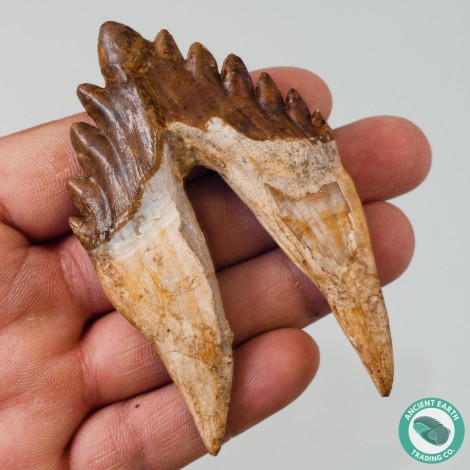 The Genetics of Whales

According to Thewissen, unlike reptiles and fish, mammal skeletons– despite their variations– tend to have a very consistent body plan. They typically have a similar number of different types of teeth (incisors, canines, premolars, and molars); the number of bones in their hands and feet varies little; and their number of presacral vertebrae tends to approximate twenty-six. But whales and their ancestors are another story altogether. In fact, depending on the species they can vary wildly in all of these domains, with some Basilosaurids having presacral vertebrae that number in the 40s.

Given the short 5-8 million year span of whale evolution, it not only suggests that environmental selection pressures were changing for these creatures, but that something in their DNA made these adaptations possible in the first place. And in particular, something targeting genes involved in structural development dramatically loosened their once-tight regulation to allow major changes to whale size and morphological pattern over such a short span of time.

Our team is currently taking on a project to investigate this aspect of whale evolution, alongside similar study of other vertebrate genomes, including humans. Hopefully more to come on this topic in future. Until then, I hope you enjoy The Walking Whales.

5 responses to “The Walking Whales”