You may or may not be aware of the trending hashtag, #DoctorsAreDickheads, on Twitter. If you’re not knee-deep in the chronic illness community or aren’t much of a Twitter follower, you may be wondering what it’s all about and why did a bunch of patients start this feisty “harshtag”?

So here’s how it all started. @stevieboebi, a woman with a popular channel on YouTube, shared her video story about her recent diagnoses of Ehlers-Danlos Syndrome (EDS) and Postural Orthostatic Tachycardia Syndrome (POTS). It took many many years, a lot of physical suffering, and many many doctors for her to finally get the right diagnoses. (According to Stevie, one rheumatologist told her that all connective tissue disorders where autoimmune conditions. Errrrr, wrong!! 🙄) Anyways, at the end of the video, venting her frustrations she commented that, “Doctors are dickheads.”

So, okay, we know not all doctors are dickheads. But I think every person– and especially every woman– with a chronic, poorly understood illness out there “gets” the sentiment. Some doctors can and have been absolute dickheads. We’re not just talking honest mistakes, the occasional bad days, or the overwork and burnout that doctors experience from a negligent and abusive hospital system that surely has enough money to hire more personnel if they wanted to. We’re talking about purposeful CRUELTY. Doctors who chide their patients to their faces, doctors who patronize and are abusive, doctors who are two-faced and make fun of suffering patients behind closed doors, doctors who refuse to refer on to specialists leaving a patient with no more answers than when s/he first walked through the door, doctors whose egos prevent them from admitting to the patient, “I don’t know. But I’ll help you try to find out,” and doctors who assume every weird physical symptom must be anxiety in disguise or some other psychological disorder because surely medicine knows everything and weird symptoms are simply impossible. (If I’ve learned anything from EDS and its related conditions, EXPECT THE WEIRD!!)

If nothing had happened after that video, the hashtag would’ve been DOA. But a well-meaning (I assume “doctor”?) channel subscriber of Stevie’s took polite offense to the generalization. –I can understand it: If I were in her shoes and wasn’t a zebra, I can’t say I wouldn’t have made the same protests, merely for the sake of accuracy. I mean, of course not all doctors are dickheads. But unfortunately, when dealing with a bunch of traumatized people, accuracy is small potatoes compared to the underlying emotional message. What’s important is that many people in the chronic illness community feel like a lot of doctors are dickheads because that’s precisely how these patients have been treated by many doctors. And believe me, I’ve heard some absolute horror stories. Sh** that would shock you green! 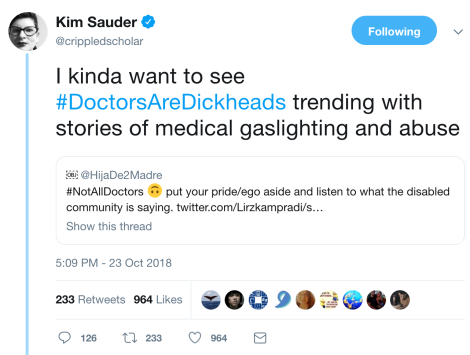 And since then, patient stories have flooded Twitterland. Many doctors jumped into the fray, some to be supportive (yay!), some to defend their egos (boo!), and worse still, some to begin the alternative hashtag, #PatientsAreDickheads (seriously???). Update: #DoctorsIRespect is also now trending and focuses on the positive ways in which doctors have improved the lives of those with chronic illnesses.

Overwhelmingly, I’ve seen medical students proclaim, “Thank you for your stories! I don’t want to be that kind of doctor!” giving us all hope that change will come with newer generations of physicians who are still blessed by that bountiful gift: idealism. Perhaps our stories will stay with them longer as they struggle against a profit-focused healthcare system that works them till they’re so drained they can barely break a smile and lift a sanitizer-laiden hand in greeting to patient after patient.

Most importantly, I hope the hashtag brings more attention outside the chronic illness community to often-invisible chronic illnesses themselves, because this isn’t just about medical bias, it’s about cultural bias. The fact that we as a culture treat women as “hysterical” (other women included!) and as therefore unreliable reporters of their symptoms, significantly affects patient care. (See the book, Doing Harm, by Maya Dusenbery for an awesome review of sex/gender disparities in our healthcare.) Unfortunately, we have been inculcated to view femininity as physically weak, sick, yet undeserving of treatment due to “malingering,” and this impairs the quality of modern healthcare– not to mention how it affects daily life! You can thank the Victorian medical establishment for popularizing that theme. Sigh. 🙄 (See For Her Own Good by Ehrenreich and English for more.)

Modern doctors, whether they know it or not, have inherited a Victorian white-male misogyny that falsely places them higher in our cultural hierarchy. Even during my grandmother’s time, it would’ve been essentially sacrilege to question a doctor’s diagnosis and prescribed treatment. You didn’t question, you just obeyed. It wasn’t a profession: it was a religion.

Nowadays, with access to the internet and materials that would’ve once only been reserved for the educated few, as well as access to patient groups in which they can give each other hope, strength, and courage, patients are more inclined to advocate for themselves when they feel a doctor may be wrong. This is a battle that doctors, only a few decades earlier, would not have had to fight. It’s a good change, but it’s not an easy one to endure. No longer are they untouchable Zeus atop Mount Olympus, each doctor is now expected to be not only perfect but intimately human and compassionate. It’s not an easy balance to achieve but one towards which many doctors continue to strive. –The ones who aren’t “dickheads,” that is. 😉

Many GPs and ER/ED docs simply aren’t familiar with these sex-biased chronic illnesses like EDS and POTS, in part because they’re considered “rare disorders.” (We won’t even delve into medical debates as to their diagnostic legitimacy.) And while it’s true that a doctor may come across a given rare disorder infrequently, rarely, or perhaps never in her/his entire career, the total number of people with rare disorders living in the United States equates to roughly 10% of the population. That means that, on average, a doctor might expect that 1/10th of her/his patient population has some kind of rare condition. And since people with rare disorders are more likely to require frequent medical help, that percentage is probably even higher for certain specialties.

In short, doctors must start expecting the unexpected. Despite the old adage, “Whenever you hear hoofbeats, don’t think zebras, think horses,” when 1/10th of your patient population is in fact made up of zebras, you can’t give every patient a “horse” pill and send them on their merry way. It does take more time and energy to help us, but if you do you will get the most grateful fan club you’ll ever have in your life. Trust me. ❤️

8 responses to “What’s #DoctorsAreDickheads All About?”