Cancer. The thought of it can be absolutely terrifying. Moreso than heart disease, stroke, or Alzheimer’s. Maybe because its diagnosis often seems so out of the blue, or because we feel like we have so little control over whether we manage to live through it or die from it. Admittedly, at least with heart disease you can eat better and exercise more. But cancer is different. It’s like we’re all playing the lottery, and sometimes your number just comes up.

Last year my mother, at the age of 69, was diagnosed with colorectal cancer. Thankfully it was at an early stage and was cured by surgical removal (though the recovery was miserable due to post-surgery infection, but I’ll leave that topic for a future post). But the whole experience made me realize, as I sat there in my mother’s hospital room keeping her company, trying to help keep her spirits up while we waited for the results of the biopsy, that cancer isn’t just something that other people, the few unlucky, get. It’s a disease that many of us will suffer from, perhaps die from. And though it’s prevalence today may be complicated by our modern ways of life, it’s something that is a fundamental part of our genome. It may kill some of us, but many of the things that ultimately go wrong in cancer also underlie an organism’s ability to genetically adapt to changes in its environment. Those same characteristics that cause progressively worsening genetic disorganization as cancer advances have probably also made genetic complexity– made us– possible.

Above is a karyotype of human chromosomes. Sample A is from a non-cancerous cell line, while Sample B is derived from a bladder cancer. Humans (normally) have 23 pairs of matching chromosomes, as seen in A. As cancer progresses, chromosomal abnormalities become more numerous. Image borrowed from HERE.

There are many factors involved in cancer development and, not being an expert, I won’t claim that tumors are derived from one kind of happenstance more than another. It’s complex, involving many genetic and epigenetic variables over a lifetime. But as you can see in the image above, cancer cells often have one genetic commonality: progressive instability. In early stage cancers, the mutations are few, but as the disease progresses disorganization of the genome becomes more and more severe to the point, like the image above, some chromosomes can become unrecognizable.

“The emerging concept is that genomes of cancer cells are unstable, and this instability results in a cascade of mutations some of which enable cancer cells to bypass the host regulatory processes” [2].

Microsatellite instability has been of keen interest in oncological research. Microsatellites are short sequences in which 2-6 base pairs of DNA are repeated successively in the genome, e.g., CACACACA or CAGCAGCAG. Most frequently these occur in intronic regions, though are often typical of promoter sequences that aid in transcription initiation in numerous genes [3]. These short repeat sequences have a propensity for instability, either losing or sometimes gaining further repetitions. Napierala et al. (2005) have found that instability of these microsatellites is promoted by global and local negative supercoiling (-σ). Supercoiling is basically the sum of the DNA twisting and writhing around a central axis. The image below from Sinden (2013) gives an idea of what the different coils may look like. 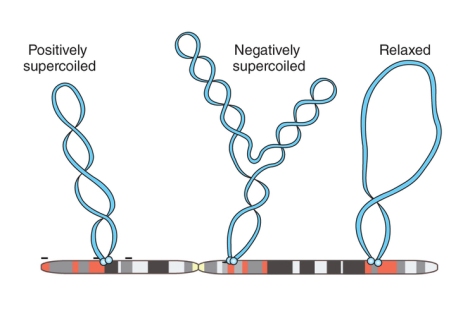 Eukaryotic DNA generally has a slight negative supercoiling to it. However, as the density of turns increases producing more tension, the more likely these microsatellite segments will jut out of the traditional double-helix conformation and form non-B-DNA structures like hairpin loops, triple helixes, tetrahelixes, slipped structures, and other random coils.

The image above uses rubber bands as a substitute to illustrate how increases in superhelical density also increase the strain placed on the double helix, in this instance causing the rubber band in the lower segment to “writhe”. The lower right-hand segment is meant to imitate the replication fork that occurs during gene expression which subsequently changes the torsional strain on the DNA.

Just imagine that with increased tension on the helix, it becomes more and more energetically difficult to keep these rebellious microsatellite sequences in line. During transcription, these loops can either fail to be transcribed (similar to the image below) or should they occur before the replication fork, can even prevent transcription altogether [2, for review].

Transcription events (as illustrated in the rubber band image above) often produce a higher density of local negative supercoiling, prompting the formation of non-B-DNA structures like hairpins. Since the formation of these alternate structures lead to greater DNA instability, the rate of mutation can increase simply through gene expression [2].

Last week I talked about housekeeping vs. contingency genes in the eukaryotic genome. As a recap, housekeeping genes tend to be pretty stable, both in prokaryotes and eukaryotes, which is a good thing since their gene products are vital in numerous basic cellular functions. Contingency genes on the other hand are much more prone to mutation. One thing I didn’t mention last week, however, is one particular, very common characteristic of contingency genes: microsatellite sequences. That’s right, the high mutation rates of contingency genes within bacteria are largely a result of slippage from these short repeat sequences [4]. They form various loop conformations which can impair accurate transcription or may even be excised by DNA repair machinery [2].

Cancer, contingency genes, and even my own area of study, autism, all share some surprising commonalities when it comes to genetics. In the larger scheme of things, it seems that the same mutagenic tendency towards cancer also probably underlies an organism’s ability to adapt genetically to the demands of its environment. And through that adaptation, incredible variability and complexity have arisen over evolutionary time. We are what we are because of that propensity.

I’m not grateful for cancer– anymore than I’d be grateful for a deadly car crash. But cars serve their uses and like cars, mutations, though fraught with potential danger should something go awry, offer living organisms a means to avoid extinction.

As cold as it may sound, it’s a game of risk. Win some, lose some. But in the meantime, medical science will continue to work to ensure we have the best chances possible to keep on winning.

6 responses to “A Little Cancer in All of Us”

Ballastexistenz
Future of Research
the Exhibitionologist