I’ve talked a lot about DNA mutations, transposons and retrotransposons, microsatellite repeat sequences in cancer and autism, and even somatic mosaicism on this blog. But I haven’t really talked about all these things in relation to my favorite organ system: the brain. 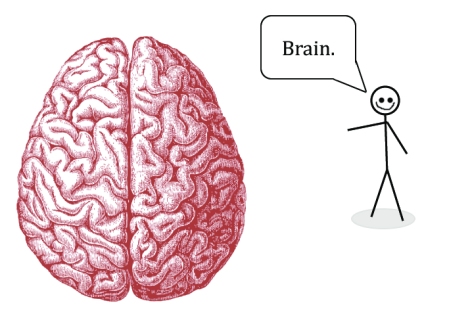 Now why, above any other system, would I single out the brain? Aside from my own personal bias (–ya gotta admit, the brain is pretty friggin’ awesome), it often displays a surprising level of somatic mosaicism as compared to the rest of the body. As a reminder to readers, and for those new to the site, somatic mosaicism refers to the presence of two or more cells in a single organism which display variations in genotype. Severe mosaicism sometimes in the form of extreme chromosomal malformations can be a sign of cancer; considerable mosaicism in a single gene across tissue types can be indicative of various genetic diseases such as some of the polyglutamine (polyQ) diseases I’ll refer to later; and meanwhile moderate mosaicism is normal and to be expected [1, 2].

LINE-1 (L1) transposable elements are a family of retrotransposons, some of which are still transpositionally active in the human genome. By “transpositionally active” I mean that they are still capable of producing RNA copies of themselves which can be reverse transcribed into DNA and inserted elsewhere in the genome (see image below). Some studies have shown that L1 retrotransposition can account for a certain level of mosaicism in the brain, particularly within the hippocampus, an interesting finding considering the hippocampus produces neurons throughout adulthood [3]. That same study by Baillie et al. (2011) reported a somatic retrotransposition event in the intron of Hdac1, a histone deacetylase which is a known regulator of L1 expression within the human genome, suggesting how a single transposition event might alter the capacity of a given cell to regulate further insertions [4]. 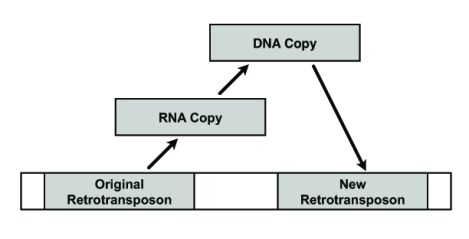 As a segue, retrotransposition usually facilitates the creation of short repeat sequences (microsatellites) within the genome at the points of insertion (e.g., CACACACA). They arise through the act of reverse transcription and are referred to as target-site duplications (TSD). Microsatellites litter the genome, exonically and intronically, and as I discussed last week are prone to inducing various types of mutations within a given gene particularly when the local DNA conformation is under greater tensional strain. There can be global strain upon a chromosome or, more commonly, local strain placed upon it through various binding partners such as transcription factors.

These microsatellite repeats, particularly trinucleotide repeats, have been indicated in a number of diseases, especially relating to the central nervous system. The first trinucleotide repeat disorder to be identified was Fragile X syndrome, a condition which frequently exhibits co-occurring autism and is usually due to an expansion of trinucleotide CGG repeats which ultimately promotes hypermethylation and reduced gene expression [5].

A group of disorders known as “polyQ disorders” are due to CAG repeat expansion within coding regions of certain genes. They are known as “polyQ” because “Q” is the symbol for the amino acid, glutamine, which is coded by the sequence “CAG”. With the expansion in CAG repeats, so too does the protein product exhibit an expanded glutamine tract. Disorders falling under this umbrella category include: spinal and bulbar muscular atrophy (SBMA), Huntington’s disease (HD), dentatorubral pallidoluysian atrophy (DRPLA), and spinocerebellar ataxias (SCA) type 1, 2, 3, 7, and 17. Given the common etiology underlying these varied disorders, for some time it had been a mystery to scientists how glutamine expansion tracts could prove toxic. At least with the SCA type 1, there is evidence to suggest that in some instances the protein product exhibits loss of function and, most surprisingly, at other times as gain of function is observed. But as far as toxicity, it has also been shown that polyQ tracts have a high propensity to aggregate and form cytotoxic neuronal intranuclear inclusions (NII) [6]. Investigations into chaperone complexes which can unfold or disaggregate these polyQ inclusions are promising as a treatment for symptoms of these disorders.

The above image shows a nuclear inclusion from a Fragile X patient with ataxia. Such inclusions are associated with toxicity in some of the trinucleotide repeat disorders. Image borrowed from HERE.

All of these disorders have reported somatic mosaicism within the mutated genes, such that different extremes of expansion are seen in different organ systems. As you might now be wondering given the topic of this blog post, what are the rates of mosaic expansion in the brain? Well, for the majority of the CAG repeat disorders, the brain exhibits comparatively greater expansion than other tissues, with the notable exception of SBMA, which instead shows greater variability in cardiac and skeletal muscle, skin, and prostate [7]. Aside from the obvious, that these conditions tend to be overrepresented by neurologic issues, why might the brain exhibit greater repeat expansions than other organ systems?

Damned if I know.

BUT if I had to take a guess, just a wild guess, outta the blue, put the ol’ thinking cap on and give it a good long Rodin-style try… I would say that these mutated genes 1) lie in regions which have a greater baseline superhelical strain which, upon binding with just the right (or in this case, wrong) partners, promotes alternate DNA conformations which are prone to replication errors and breakage, and 2) the expression of these mutated genes may be key in central nervous system development and/or homeostasis, so that they are constantly being transcribed and therefore made continually vulnerable to this type of mutation.

The brain after all is a very busy system. It consumes vast amounts of resources and never sleeps. Just imagine how much transcription is continually going on and how each transcription event is a risk for mutation.

It’s probably not as simple as this. (When is it ever?) But I have a strong suspicion that transcriptional activity may play a key role in this type of mosaicism. Using Occam’s Razor, it’s the simplest way to specifically induce increased superhelical tension on a target gene and induce mutation. And as scientists plod on in their studies, one day we may find out whether this prediction is true. I know I’m keeping my fingers crossed. 😉

4 responses to “Mutations on the Brain!!!”